The last few days, I have been experiencing the spectacle that is OpenWorld. And what a spectacle it is. Howard street is blocked off, covered by a huge tent. Everything, even buses, are painted Oracle colors, and every signal change at the intersection lets loose a sea of people rushing around trying to get to the keynotes and sessions. Watching 42,000 people moving around in the 3 blocks that make up Moscone Center is quite a site.

The keynotes have been interesting and informative. At his keynote today, Larry Ellison announced the availability of Unbreakable Linux from Oracle. He also celebrated the 20th anniversary of Oracle getting listed on the Nasdaq as a public company by ringing the closing bell from the keynote hall. Yesterday, Thomas Kurian gave a really good keynote describing how all of fusion middleware, including identity management, is coming together to help enterprises streamline their business operations. It helped lay the foundation for all the middleware sessions that followed, ranging from discussions on SOA adoption to IdM strategies and best practices.

This morning I participated in a session describing how role management and provisioning, when used together, can help make IdM a manageable, scalable solution for enterprises. What I would have liked to have said was unfortunately way too much to fit into the one hour time slot we were given. Sid Choudhury, a product manager in our IdM team, went on to describe the role management reference architecture that we at Oracle are proposing. This reference architecture builds on some of the concepts that I have touched upon in previous posts, and lays the foundation for what enterprises should be thinking about as they go about planning their role management deployments. The architecture diagram is given below (click on it to see a bigger version). 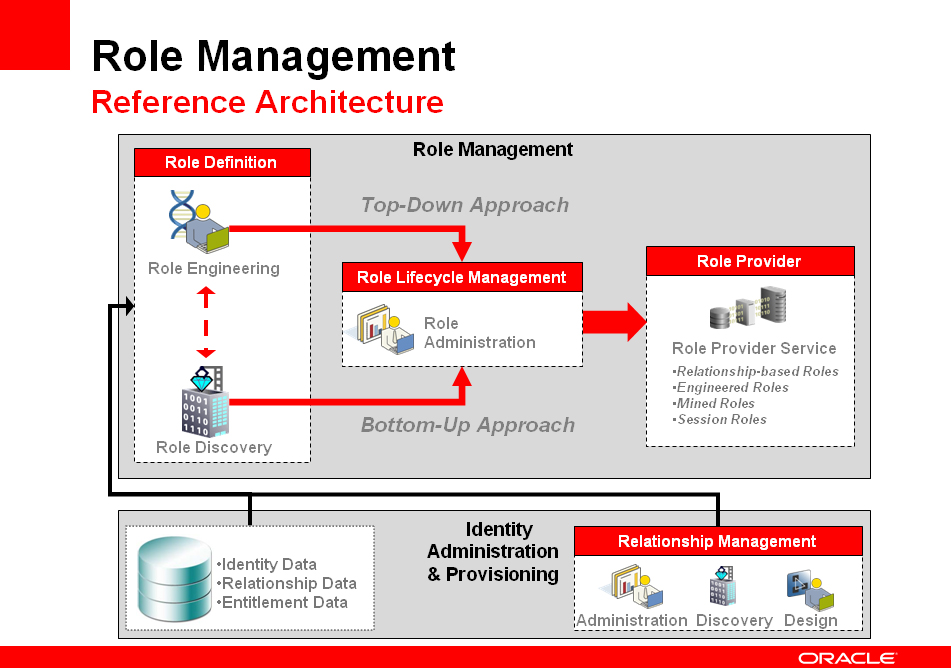 In a future post, I will discuss some of the questions we received at the end of the session.