Sounded simple enough. Join forces with Pam and Dale to put on a 3 hour workshop at the Cloud Identity Summit exploring all things identity management, each of us having a whole hour in which to dazzle the crowd. And with an awesome theme like the Hitchhikers Guide to help us keep it entertaining. This was bound to be more fun than a bar full of people enjoying Pan Galactic Gargle Blasters, right?

It was fun. After the fact. An hour is a lot of time to develop content for, yet so little time to cover such a vast and interesting topic as identity management. All 3 of us were pretty frazzled right up until the time we stood up there with the mic on (I think you can hear Pam typing away furiously in the background while I was talking). The challenge was to do it in a way that was accessible to newbies to the IAM world, while still being informative to so many that have been working in this space. And anyone who has seen my Iron Man and Monty Python themed talks in the past know that I love to compound my pain by really working the theme deep into my talk. So putting my section together became a somewhat arduous task. But in the end, all the compliments I received from attendees in Napa let me know that my labors were not in vain. But you can judge for yourself by checking out the slidecast below.

It was fun taking folks on a journey through the identity management universe, trying to answer the question of “what is (digital) identity” and exploring how identity management has tackled the task of defining and managing it over time (albeit mostly in an enterprise context). Marvin was a great help in perfectly capturing why this field continues to confound, frustrate, intrigue and engage so many of us. Though I don’t think he appreciated being involved. 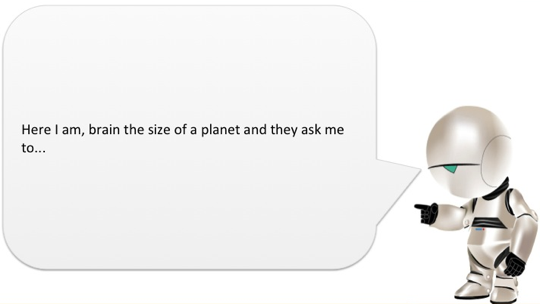 I hope Dale and Pam can put up their talks as well, so you can enjoy the entirety of what we put together. And there were some really great questions that cropped up in the course of putting this talk together, and then in the conversations I had with attendees at CIS subsequent to the workshop. They may not require us to build our own Deep Thought, but they did prove intellectually interesting. I’ll bring those up in some subsequent blog posts. But in the meantime, if there are questions that the talk above inspire you to ask, please share them in the comments, or direct them at me on Twitter.

[Cross posted to the Identropy blog]